Your browser does not support JavaScript!
June 12, 2016

Alice Through the Looking Glass 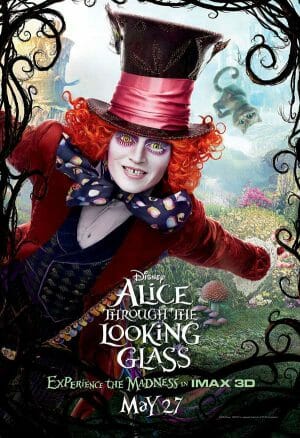 Focusing on characters we actually care about makes all the difference.

I wasn’t a big fan of Tim Burton’s 2010 retooled ‘Alice in Wonderland’. It failed to connect with me at nearly every level. Lots of fancy and wonder; very little heart and soul. Surprisingly, James Bobin’s 2016 sequel, ‘Alice Through the Looking Glass‘, rectifies this somewhat by finding a heart. By no means a great film. But, in providing “origin” stories for two wondrous characters we gain something to care about.

In quick plot-contrived necessity Alice, now a grown up pirate captain(?!), returns byway of magical mirror to Wonderland where she adventures to save her friend the Mad Hatter (Johnny Depp) from his growing, life-threatening despair.

The nonsensical story has Alice rushing in to steal a magic clock from Time himself (Sasha Baren Cohen) so she can go back and save Hatter’s family from their always assumed Jabberwocky demise. About as far removed from Lewis Carroll’s source novel, as conceivable.

There’s a moment mid-film that (briefly) paints a picture of an asylum committed Alice where Wonderland and everything else are wholly her mad delusions. Now, that is a motion picture I could truly get behind. Alas…

At least, there’s an array of returning characters which includes the White Queen (a bored Anne Hathaway), her deranged sister the Queen of Hearts (Helena Bonham Carter), the Cheshire Cat (Stephen Fry), the once a caterpillar/now a butterfly Absolem (Alan Rickman in his final role, R.I.P.), Tumbledee and Tumbledum (Matt Lucas), and, of course, the White Rabbit (Michael Sheen).

Discovering how the Mad Hatter became so mad and how the Red Queen became so angry fleetingly grounds the lunacy. With big assists from Depp, Bonham Carter, and a way OTT Baron Cohen who’ve firmly committed to these ridiculous, surprisingly heartfelt characters. Depp is more enjoyable here than he’s been in years. Hatter’s brief “madness competition” with Cohen’s “Time” is a treasure.

A (melo)dramatic Mia Wasikowska is more support character this time as the somewhat less curious “Alice“. While of the remaining extended cast only Rhys Ifans as Hatter’s judgmental father and Lindsay Duncan as Alice’s equally judgmental mother leave any impact.

Director Bobin keeps the pace “diving into an empty pool” breakneck. And the overwhelming visuals, well, overwhelm. A constant stream of colors and lights to stupefy as the story threads continuously unravel. Thankfully, Danny Elfman returns with an energetic score.

So it comes down to how much disbelief one can suspend. You might as well strap in and enjoy this bumpy, whimsical ride. Marvel at Depp and Bonhma Carter’s tragically wondered performances and all the completely unnecessary excess. ‘Alice Through the Looking Glass‘ is easily forgettable, yet, still fantastical. You might even have a little fun? But, we wouldn’t want any of that.