Your browser does not support JavaScript!
January 12, 2019

Anna and the Apocalypse 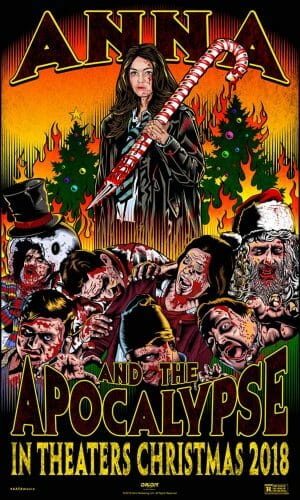 “Yeah, certain death is so much fun.”

The 2017 film ‘Anna and the Apocalypse‘ proves that “zombies” and “Christmas musical” are, not surprisingly, a wondrous fit. Crafting a fresh, impactful, and festive celebration of all things apocalypse.

Director John McPhail and the tremendous cast and crew deserve a big shout out for all the creativity on display. A showcase fueled on big Hollywood styled dance numbers, effective zombie effects, and memorable hook-filled music (courtesy of Roddy Hart and Tommy Reilly).

At the heart of the show is Ella Hunt as titular teenage heroine “Anna” in what deserves to be her big break. Seamlessly blending pathos, humor, and angst into a character we quickly fall in love with. And her singing and dancing is great.

Plotwise, it’s fairly paint by numbers zombie apocalypse fare. Ella and her friends are stuck at various locations around their quaint Scottish town when a pandemic is unleashed across the world. And now everyone is just trying to get to the ones they love and, hopefully, survive the onslaught of recently created undead blocking their way.

There’s a few notable scares, some laugh out louds, and an appropriate amount of tragedy and heartache to reflect the eminent threat. However, the hook is the musical numbers–and they’re a pure joy. Think ‘La La Land‘ fantasy blended into ‘Shaun of the Dead’ gore and humor.

Some structure and flow problems exist, however. As not only does the best song and dance occur pre-apocalypse, but, the most profound character beats resolve about 30 minutes too early; leaving the ending more than just a little anticlimactic. And, at times, plot/character logic feels forced. However, these are minor complaints.

‘Anna and the Apocalypse‘ is an energetic, gorified, and heartfelt Xmas romp through high school at the end of the world. Reinforcing the notion that the horror musical, if done right (i.e. ‘Sweeney Todd’ and ‘Repo! The Genetic Opera’), can be a thing of true cinematic beauty.

Making the zombie apocalypse look like fun. A reminder that films can still be irreverent, irresponsible, and an out-right blast to watch and enjoy.