Your browser does not support JavaScript!
January 16, 2019 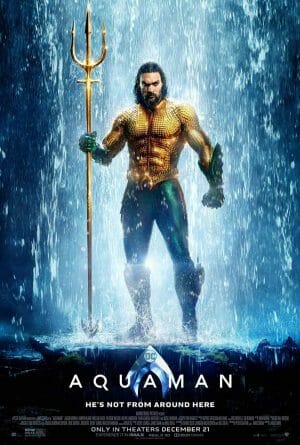 Having loads of fun at the expense of logic, story, depth, and other irrelevant stuff.

2018’s DC comic film ‘Aquaman‘ may not make much sense and its hodgepodge of genres and subplots is often a confusing, allbeit, dazzling mess. However, breezy banter, immersive underwater world building, and a barrage of action and splendor ensure true comic-book movie fun. The DC Extended Universe is finally producing product that’s at least enjoyable, if not necessarily great, filmmaking.

Arthur Curry/Aquaman’s (Jason Momoa) origins are way past cliche. Thankfully, this film spends little actual time on explaining them: Arthur’s mother (Nicole Kidman) is the refugee Queen of Atlantis and his father (Temuera “Jango Fett” Morrison) is a lighthouse keeper. When the queen is forced to return to her oceanic home to serve the “evil” king Arthur is left behind on land. Now, years later, Atlantis’s new King, Arthur’s half-brother (Patrick Wilson), seeks the power to rule the ocean and take over the world. And only Arthur can stop him, blah, blah, blah…

It boils down to Arthur and Atlantis princess Mera (a vapid Amber Heard) adventuring to find a lost magical trident which will grant Arthur the power needed to defeat his brother and bring peace between the worlds of the ocean and land. I seriously couldn’t make this sh*t up. Yet, director James Wan’s unique perspective, impressive visuals, and a lighthearted tone elevate this beyond silly mash-up of “Indiana Jones”, Greek mythology, and “The Lord of the Rings”.

Most of the actors stray towards a light irreverence–everyone seems to be just having a blast. Especially Jason Momoa, whose unpolished charm actually services “Arthur’s” bumbling rise to glory. However, Patrick Wilson clearly never got the memo as his villainous (in more ways than one) performance lacks any and all charisma.

An awkward Pop/Rock/Rap soundtrack and occasional wonky CGI work to spoil immersion. While abundant subplots and side characters compound into an incomprehensible, tonal nightmare lasting far too long and offering up little to care about. And like many other superhuman superheroes, Aquaman comes off as pretty much indestructible. Ensuring that all his epic heroics lack any perceivable threat and, as result, appear mostly inconsequential.

Still, I prefer this tripe to the weighty pathos of ‘Wonder Woman’. Arthur Curry is the kind of “act first, think later”, smart-ass superhero this overly serious world needs right now. ‘Aquaman‘ is frivolous, action-drenched adventure fun. A guilty pleasure that could have been much worse.