Your browser does not support JavaScript!
November 15, 2018 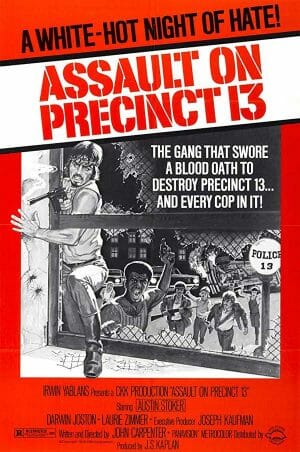 John Carpenter’s first foray into badassery, 1976 thriller ‘Assault on Precinct 13‘, stands as one of the best of that pivotal cinematic decade. A fantastically stripped down survival horror/Western hybrid.

The set-up is pretty straightforward. A gang/police war is brewing across Los Angeles when Lieutenant Ethan Bishop (Austin Stoker) is assigned to babysit a soon to be abandoned police station in a crime-ridden ghetto. While a prison transport bus carrying death row inmate Napoleon Wilson (Darwin Joston) is forced to hold up at this nearly empty precinct. Then a man arrives seeking protection after unleashing vengeance upon a gang leader who brutally, and senselessly killed his young daughter. Gang members soon surround the station intent on killing everyone within, or die trying.

Carpenter makes the most of a very limited budget. Nail-biting tension is built quickly and without needless flash. Wasting not a single line of dialog or camera shot. We understand the threat, we know the setting, and the characters are defined just enough for us to care. Trial by fire guerrilla filmmaking made to look effortless.

By forgoing needless subplotting or senseless banter the action and environment alone makes the film. From ever so cool one-liner gags (“Got a smoke?”) to the silencer muzzled gun battles the atmosphere just drips. With one of Carpenter’s best synth scores invoking an extra nasty urbanesque horror creep.

The unpolished performances never distract and the chemistry between “partners of circumstance” Stoker and Joston is stellar. And, refreshingly, from the decade that birthed “blaxploitation”, Lt. Bishop (Stoker) being African-American is barely addressed and entirely plot irrelevant.

A simply brilliant script, efficient and atmospheric direction, and the charming chemistry of the cast lead towards one helluva thrill ride. ‘Assault on Precinct 13‘ is a grand mashup of Howard Hawks/John Wayne’s Western ‘Rio Bravo’ and George Romero’s ‘Night of the Living Dead’ that can not be missed.

Without any extraneous subplots or characters and a quick pace, tight environs, and simple story you might forget to blink. A stylized, nail-biting, action packed, modern day Western horror masterpiece.

Grading Guidelines:
A
– Artistic –* Creative work defined by artistry above all else.