Your browser does not support JavaScript!
May 5, 2018 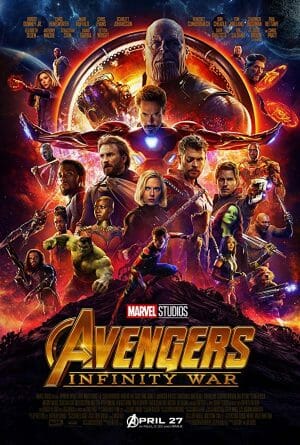 The biggest comic book spectacle of the last decade is a surprisingly emotional ride.

You better arrive properly schooled in Marvel’s Cinematic Universe before watching ‘Avengers: Infinity War‘. This 2018 film doesn’t care much about backstories, character building, or any silly “Previously on…” exposition. Nonetheless, it’s an unprecedented two and a half hour long roller-coaster of action, thrills, and laughs with a surprising amount of resonance.

Most comic book films have a “villain problem”. We instinctively know that Captain America, Iron Man, and, even those intergalactic misfits calling themselves Guardians of the Galaxy will rise to protect lives and save the universe. But, why does anyone spend so much effort on wanton destruction? Greed? Power? Jealously? …Yawn.

Thanos (Josh Brolin) has arrived. Are you prepared?

Thankfully, ‘Infinity War‘ eschews that trend by offering up a worthy adversary for these “Earth’s Mightiest Heroes”. What little character development the film provides shines a bright, almost sympathetic light upon Thanos (Josh Brolin). This fallen Titan “planet killer” isn’t just interested in power for power’s sake. Thanos believes himself the hero in a struggle to bring “balance to the universe”. And sacrifices must be made on his quest to claim all six infinity stones.

And sacrifices we get. All the effort Disney and their MCU have made over the last decade to foster our empathy for these now dozens of disparaging supers pays off in epic, gut-wrenching dividends. These heroes quickly face a cold reality: superpowers, or not, they can be defeated and/or killed while facing this seemingly unstoppable cosmic wrecking-ball and his devoted minions.

Kudos to the Russo brothers for adeptly handling the many bouncing balls spread across multiple planets under ever changing battlefields of superhero soldiers. All of the characters remain relevant–getting a defining moment or two each. Standouts include infinity stone powered android Vision (a sublime Paul Bettany) whose very personal stake offers a centralized rallying point. While “God of Thunder” Thor (Chris Helmsworth) and his compounded tragedies gets probably the biggest character arc and the biggest hero moments. And the heartbreak origin-story backed relationship built between “Guardian” Gamora (Zoe Saldana) and her “adopted” father Thanos surprisingly grounds the back half as these larger-than-life events unfold towards the all-holds-barred cliffhanger finale.

2018’s ‘Avengers: Infinity War‘ exceeds reasonable expectations in uniting all (almost) the Marvel heroes against perhaps the best (or, at least, the biggest) arch-villain they’ve ever faced. It’s breathtaking in scope and presentation, way funnier than a war to save the universe should be, and surprisingly dramatic as these usually indestructible supers face mortality both as a team and as one highly dysfunctional family. Unfortunately, a couple of the potentially momentous “introductions” fall woefully flat and logic be-damned contrivances pile on quickly. But, you’ll hardly notice or care.

–A large “small nitpick” that I maintain about most of these epic sized slug-fests is a near total lack of subtly. With this many heroes–quite a few being outright geniuses–you’d think they be able to come up with something better than let’s just beat them all to a bloodless (PG-13!) pulp. But, I guess that’s just the “Star Trek” within me lashing out.

Trailer:
Grading Guidelines:
B
– Synced –* A nice balance of art and entertainment.