Your browser does not support JavaScript!
February 10, 2019 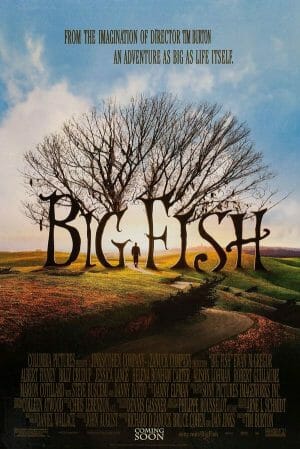 “A man tells his stories so many times that he becomes the stories.” –Ed Bloom

In honor of the passing of the great Albert Finney I thought I should revisit his last great film, Tim Burton’s 2003 fable ‘Big Fish‘. Finney’s heartfelt, dazzling performance is only one of things that make this classic a masterpiece.

Edward Bloom (Albert Finney) is a man of tall tales. Someone who just can’t help himself when it comes to the telling of big stories about his life. Unfortunately, Ed’s adult son Will (Billy Crudup) no longer has any patience for these “lies” heard his entire life and, as result, hasn’t spoken to his father in years.

But, when his mother Sandra (Jessica Lange) calls to tell Will that his father is dying, Will returns home for one last chance to connect with the person beneath the stories. He soon discovers that the truth he sought about his father was always there. Ed Bloom kept literally nothing from anyone who wanted to know–he just added a few things for flavor.

From the opening narration of Ed as a young man (Ewen McGregor) onward nothing about his life’s story is simple. The narration switches between Ed at different points in his life and is told by many different people he encountered along the way. Nothing is linear, it dances around events and time as the film demands. Yet, a continuity remains–these oft-told stories have become so intricately woven into Ed Bloom’s life that literally no one knows where fact and fiction lie. “Most men, they’ll tell you a story straight through. It won’t be complicated, but it won’t be interesting either.”

McGregor does a fine job as the youthful, theatrical “Ed Bloom“. Yet, its Finney’s weighted charm as the older, but no less whimsical man that dominates. Revealing “confessions” with his skeptical, longing for understanding son just punch you in the gut–Billy Crudup is simply amazing. While Jessica Lange shares some truly memorable, resplendent movie moments with Finney as this lifelong love affair now comes to its end.

Tim Burton’s long, often masterful career is, unfortunately, peppered with miscalculations and commercialized, allbeit, visually-striking bunk. However, ‘Big Fish‘ stands proudly amongst (as?) his best, uniting a stellar cast to present the hauntingly sublime story of a dreamer whose life was lived big and told bigger than life. A tour de force.

Grading Guidelines:
A
– Artistic –* Creative work defined by artistry above all else.