Your browser does not support JavaScript!
December 12, 2016 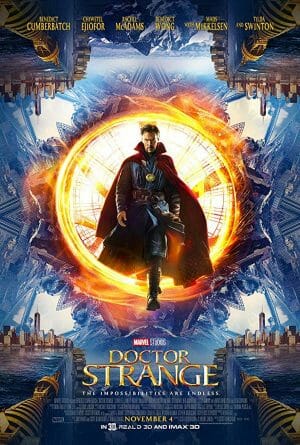 An audacious undertaking for one of comic’s most “out there” characters.

The MCU (Marvel Cinematic Universe) has been playing things mostly safe, thus far. Running these enhanced human/alien characters through scientifically explainable places with little room for out of the box interpretations. However, 2016’s ‘Doctor Strange‘ dramatically, dangerously changes everything Marvel (at least on planet Earth). This magical world exists far beyond anything scientific.

Benedict Cumberbatch as “Steven Strange” embodies all the arrogance, narcissism, and boundless jocularity of this brilliant neurosurgeon turned master magician. Watching the cock-sure doctor quickly dissolve into self-pity upon ruining his priceless hands in a reckless accident is painful catharsis. After spending a small fortune on useless medical “cures” and with nothing left to lose Strange flees to Tibet in search of a miracle.

There he encounters the mystical sage “The Ancient One” (Tilda Swinton, charmingly brilliant). And down the rabbit hole this desperate, eager-to-learn acolyte goes.

Credit due to not just to the filmmakers (led by director/writer Scott Derrickson) and the diverse cast/crew but also to Marvel itself. This is a high-risk, sanity-bending tale. Visually quite similar to ‘Inception’, yet, with its comic roots ‘Doctor Strange‘ goes places far stranger. Quite removed from Iron Man’s humble beginnings in a solitary Afghan cave.

In support we get Benedict Wong, Chiwetel Ejiofor, and a scene-stealing Michael Stuhlbarg. While a fiery (and woefully underutilized) Rachel McAdams provides the perfunctory “love interest”. Unfortunately, Marvel, once again, puts most its efforts into creating deep heroes/anti-heroes and misses the mark by giving them half-baked, superficial villains to oppose. This time its the evil multidimensional God Dormammu worshiper “Kaecilius” (Mads Mikkelsen).

As an origin story it moves along quickly; the raw acting talent alone compels as action wanes. And the vast world it opens up for the MCU is much welcomed. I’m more excited about what comes next than from any previous MCU film. We’re finally into the anything is possible fantasy of my childhood’s imagining. And, gasp, a save the day finale that relies more on intellect than just punching harder(er).

OK, so there’s plot holes big enough to fly a helicarrier through; all the “wow” comes at the expense of depth; the abundant CGI wavers between seamless and silly; and the Doctor’s rise to “master” doesn’t feel truly earned. But, as origin stories go it’s less messy than most.

Clear any preconceptions about grounded, gritty comic book adaptations and take a step back into the wonder of youth. ‘Doctor Strange‘ is one Marvel feature that feels truly “comic”. Magical production, action, and performances that’ll put a childlike glean in your eyes.

Trailer:
Grading Guidelines:
B+
– Artistic –* Creative work defined by artistry above all else.