Your browser does not support JavaScript!
January 12, 2019 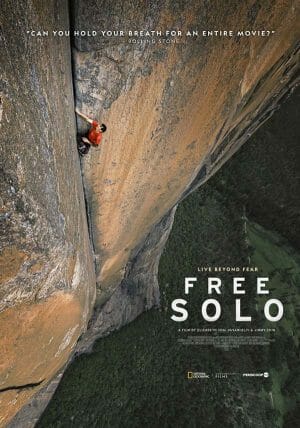 The 2018 documentary ‘Free Solo‘ may very well be the most exciting, edge-of-your-seat thriller I’ve watched the last year. In fact, during key moments I actually looked away out of uncontainable anxiety. And everything seen onscreen is happening for real. Wow!

Unlike traditional cinema which is the product of pure creation; documentaries rely mostly upon the compelling nature of what can’t be created and can only be reported. Therefore, the subject alone must engage and/or provoke. And professional climber Alex Honnold has absolutely no problem provoking an emotional response.

His singular resolve and overwhelming obsession is infectious and absolutely crazy. He tackles some of the world’s most difficult big wall climbs in an addictive “Free Solo” fashion. Which means that he climbs completely alone and without any ropes or climbing gear. Let me repeat that, thousands of feet above the ground Honnold climbs shear rock faces without any backup–one simple, little mistake means his immediate death. Alex’s fellow professional climber and friend Tommy Caldwell equates it to an Olympic event were you either earn perfect Gold or you die. 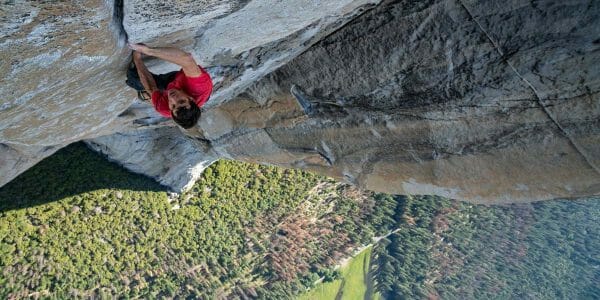 Alex Honnold is fearless (and a little crazy).

With “warm-up” runs across the globe and numerous practice climbs of El Capitan utilizing ropes and partners there’s no shortage of big thrills and epic, vertigo inducing cinematography on display. The technical achievements of these fellow climber filmmakers is its own striking accomplishment.

However, the heart of the film lies in the more intimate moments that present Honnold as not only a perfectionist athlete, but, as a human being filled with doubt, frustration, and loneliness. Despite the fact that his chosen profession immediately qualifies as insane and unbalanced, his confidence and “you gotta die sometime” approach to life makes it almost seem rational…almost.

Witnessing Alex and girlfriend Sanni McCandless work through often conflicting emotions about the insanely high risks is honest, enthralling, and painful. You gotta feel for Sanni as she fights a losing battle against Alex’s unrelenting will to put his climbing pursuits above all else, including his own life. She either has to accept that nothing/no one will stop him from attempting this or leave him behind. And we get just enough of a glimpse into Alex’s backstory to ensure we care about this oddball charmer and his OCD driven passion.

Even more difficult than squirming through Honnold’s fearless ascent of El Capitan was watching the horrified shock fleet across the filmmakers’ faces as they helplessly look on. If professional climbers can’t even stand to watch that’s a pretty good sign that the danger and risk are beyond nuts. Awe-inspiring and bat-sh*t at the same time.

Whether you maintain any interest in climbing or not the 2018 documentary ‘Free Solo‘ stands as an absolute must see. Impressive as both a document of a pure force of will, milestone athletic accomplishment and as a brilliantly executed, beautiful film that leaves us invigorated and with one lingering and profound question: What are we willing to risk to accomplish our own dreams?

You’re unlikely to find a more compelling example of someone following their dreams–no matter how absolutely insane and high-stakes they are. A brilliant, breathtaking, and dramatic undertaking and accomplishment.