Your browser does not support JavaScript!
May 30, 2014 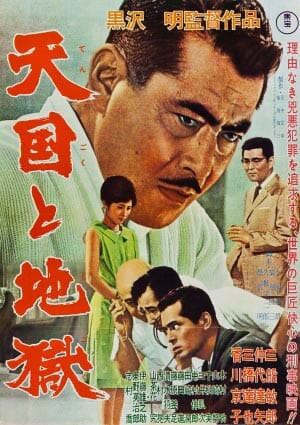 If I had to pick out only one detective noir film for my desert island.

Akira Kurosawa is a film genius, period. Critics, scholars, and movie fans alike will continue to discuss and enjoy his works ad infinitum. He didn’t create films, he created cinematic masterpieces. His 1963 crime thriller ‘High and Low‘ set a benchmark for film noir.

Wealthy industrialist Kingo Gondo (an amazing Toshiro Mifune) risks losing everything when a kidnapper mistakes a servant’s son for Gondo’s own. Bringing in Chief Detective Tokura (Tatsuya Nakadiam, brilliant), Gondo is encouraged to pay the ransom in hopes of getting the boy safely returned with a chance the police will recover the ransom money after. Now Gondo must weigh the life of a loyal employee’s son against his own family’s financial security.

These emotionally draining early sequences reflect Kurosawa’s strength at character development. We quickly understand and respect Gondo despite his wealth and influence. A man of principle, willing to do whatever is necessary to accomplish what he believes is right. Watching his desperation form as he accepts this necessary self-sacrifice is heart-wrenching.

Det. Tokura is equally strong-willed. He perceives Gondo as a decent man and is desperate to achieve true justice. The exciting back half focuses on Tokura’s exacting, clinical pursuit of the kidnapper. A harbinger of the police procedurals that would dominate cinema and television over the coming decades.

Kurosawa films mandate social commentary. Here he strips apart the social caste system in Japan; putting Gondo’s home on a hill overlooking the city’s poor. Yet, ultimately showing that the true measure of a man is not how much money he has, but in the choices he makes.

And the greed of corporate Japan is bitterly attacked as Gondo’s peers turn against him when he needs them the most; to return only when it benefits their interests. Right and wrong has no place in business.

The performances, even in the smaller roles, reveal depth; the story adapted from an Ed McBain crime novel is clever and believable; and the production reflects Hollywood level quality. The B&W photography is exquisite and rife with symbolism–the nighttime foot chase finale through the heart of the city is a highlight. Even the noir musical score is spot on. Perfectionistic, awe-inspiring filmmaking

Most of my issues with the film stem from 1960s social mores and the Japanese/America cultural divide. With the portrayed inequality of women being particularly bothersome. And much (all?) of the film’s dialog was synchronized in post which is a notable “imperfection”. Perhaps unreasonable expectations for a now 50+ year old film?

‘High and Low‘ / ‘Tengoku to Jigoku‘ is a watermark from an unparalleled filmmaker working in his prime. The perfect crime thriller told with passion, intense resolve, and in a gritty authentic style. A Must Watch.