Your browser does not support JavaScript!
July 7, 2018 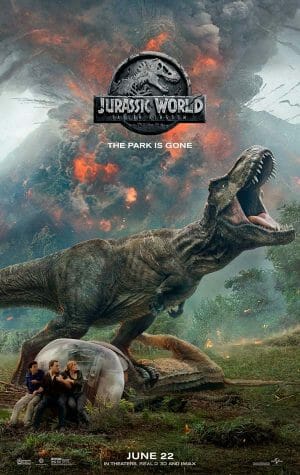 After the train wreck of 2015’s ‘Jurassic World‘ there was no way to go but up for any sequel. Thankfully, ‘Jurassic World: Fallen Kingdom‘ fixes enough of its predecessor’s problems to qualify as a success. Far from the standard of its legendary pedigree, but a good start. An adventurous and diverting summer thrill ride.

“Let’s spend billions of dollars on a high-tech dinosaur theme park that not only offers some of the worst guest safety standards of all time it is also home to a dormant volcano that could, if awoken, unleash an apocalyptic event upon the island and its high-value exhibits (and any straggler guests that security can’t rescue in time).”

Thankfully, events of the last film have finally(?) ended any future theme park reopenings. However, these “precious” dinos are a under looming threat with that volcano set to erupt at any moment. So in rides Claire (Bryce Dallas Howard), sans high-heels, and trusty macho man Owen (Chris Pratt) to save the dinosaurs’ day.

Of course, there’s plenty of corporate weasels (led by a smarmy Rafe Spall) and double-crosses waiting to unleash their own extinction level chaos for your viewing pleasure. Now where would the fun be if everyone just behaved appropriately?

This do or die timing forces Claire and Owen to dive in before reflecting on any murky morality over playing god with these noble, dangerous, and once long-extinct creatures. However, these two now come off as genuine human beings capable of maturation while their growing inner conflict parallels the rising no turning back high stakes.

The breathless first half island adventure hearkens the classic ‘Park’ films in intensity and wonder. Yet, the back half scales back and morphs into trippy Gothic techno/monster horror while continuing to traverse the realm of greed motivated scientific discovery. A creative, much-welcomed shift in tone that offers a hint of what dinosaurs run amok in the real world might entail. Perhaps, Ian Malcolm’s (Jeff Goldblum in cameo) haunting warning will finally be heeded going into ‘Jurassic World 3’–but, I seriously doubt it.

The expanded mythology offered into Jurassic Park’s origins plays like mere plot contrivance. However, it also unearths a host of twisted moral quandaries that demand further exploration for this not quite so innocent 21st century world.

I did enjoy the mixture of techno thrills, monster horror, and high adventure blended into ‘Jurassic World: Fallen Kingdom‘. The support characters remain paper thin and the plot is beyond absurd. However, our lead “heroes” are not only likable this time, they’re learning. And there’s just enough creative sparkle present that I’m actually looking forward to the next installment.

Trailer:
Grading Guidelines:
B
– Artistic –* Creative work defined by artistry above all else.