Your browser does not support JavaScript!
April 1, 2017 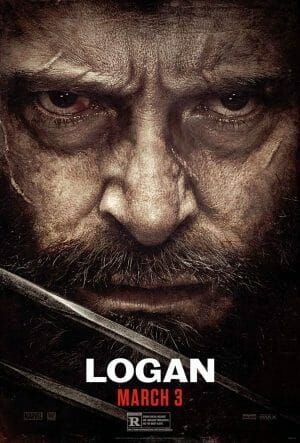 An appropriately brutal tribute to the man beneath the superhero.

Very few contemporary film characters have had the lasting appeal of Logan/Wolverine. For two-hundred years this nearly indestructible beast has fought a seemingly never ending war. However, his war is nearly over. 2017’s ‘Logan‘ is a tragedy laced character drama sitting behind fierce action and tour-de-force performances. Not for the faint of heart and about as far removed from “comic book” as possible.

“The Wolverine” (Hugh Jackman) has seen better days. Living in the year 2029, Logan is scraping by as a broken-down limo driver in El Paso, Texas attempting to save just enough money to buy a boat and take an ailing Charles “Professor X” Xavier (Patrick Stewart, amazing) out on an ocean escape.

Then, left without much choice, he gets dragged into protecting a fresh young mutant named Laura (Dafne Keen, a stunning debut) whose being hunted by a clandestine corporate cabal. So Logan, Charles, and Laura, hoping for refuge in far-away Canada, flee the oncoming army of enhanced super-soldier “Reavers”.

Wolverine’s healing mutation is slowing down as an illness rips through his body, leaving him truly vulnerable for the first time. The complicated father/son styled relationship between Logan and Professor X remains a series highlight as these no longer quite so powerful mutants face their mortality together. While Laura’s awkward, pseudo mentorship with the chronically cranky Logan is pure delight.

Between the sardonic indifference, an all-consuming rage, and inevitable heartbreak Hugh Jackman, with 20+ years in the role, instinctively reflects everything this tragic hero has seen and done. He is not some uncaring a-hole like Deadpool. Every decapitation, dismemberment, and disemboweling, although thrilling to watch, feels like another defeat for someone just wanting to live in peace.

Don’t enter ‘Logan‘ expecting light popcorn fare. This is a vicious, emotional roller coaster that leaves scars. But, I guarantee you’ll be better for the experience. A wondrous, high-note way to end Jackman’s tenure.

Letting this burned-out, immortal anti-hero run wild without restraint offers not only visceral brutality, but the pathos he’s left with after a lifetime of war and senseless killing. A beautiful send-off for both this character and the actor.