Your browser does not support JavaScript!
April 5, 2018 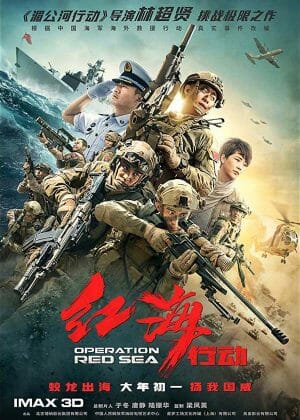 Blowing sh*t up is not just an exclusive to Hollywood war cliche. It’s a global phenomenon.

It’s only fitting that the emerging superpower of Chinese cinema begins to out Hollywood Hollywood. Their 2018 battle flick ‘Operation Red Sea‘ cranks out Jerry Bruckheimer/Michael Bay-isms to its overflowing limit and delivers one of the most over the top action spectacles in recent memory. And it’s not half bad to boot.

As if the plot matters in any of these testosterone fueled jingoistic excuses for excess… This loosely based on true events story sends a squad of elite naval special forces soldiers into the Middle East to rescue Chinese nationals trapped in a brewing rebellion. Along the way they pick up a reporter whose investigating terrorists looking to acquire stolen radioactive yellowcake and build dirty bombs with it.

And, as this genre absolutely demands, sh*t soon hits the fan. A fascinating crescendo of endless explosions, slo-mo melodramatics, machine gun assaults, sniper duels, subtle as a hurricane character moments, and enough war carnage to make even Quentin Tarantino blush. Truly commendable in how much they shove into two hours. There’s even a “Mission Impossible” styled exclamation point finale. Did I mention the tank battle? Or the sandstorm? How about the pirates?

The production is top-notch all around, even the abundant CGI. Special nod to the somewhat restrained, perfectly rendered “bullet time” sequences executed during the most chaotic of moments. A nice artistic flair amidst all the action cliche and paint by numbers battle carnage.

Expectedly, the performances vary from passable to cringe worthy and the characters never venture far from one-dimensional. However, the direction from stalwart Dante Lam is unflinchingly intense and, once you get past the silliness of it all, the resolutions and payoffs actually sink in. You may not remember their interchangeable names, but their go down swinging sacrifices are duly noted.

Take a little ‘Lone Survivor’, mix-in a splash of ‘Black Hawk Down’, and then toss them into a Chinese military propaganda kettle and you’ll end up with something like ‘Operation Red Sea‘ / ‘Hong hai xing dong‘. All the best (and the worst) of American battle action flick heroics lovingly repurposed. You’ll have a mindless blast.

The epic battle action may take second fiddle to the Chinese jingoism and military propaganda–but, no more so than any typical American war cliche flick. An expertly crafted excuse for excess.