Your browser does not support JavaScript!
April 16, 2018 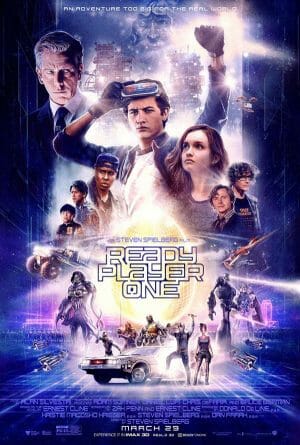 Wade Watts (Tye Sheridan) lives in Columbus, Ohio, the year is 2045. His world consists of dilapidated housing developments stacked upon one another in a cluster of poverty and little chance at a better future. The rich control everything. Sound familiar?

Only through the “OASIS” do people get any chance to live their dreams. A virtual reality hybrid of endless multiplayer games and limitless worlds bridged through VR goggles, sensory suits, and always on broadband.

When eccentric OASIS creator James Halliday (Mark Rylance, delightful) died he hid an “Easter egg” reward inside those game worlds that only a dedicated and truly worthy player can hope to discover. The one who finds it inherits control of OASIS. Providing a spark of hope for millions of gamers trapped in a near-hopeless world.

Of course, the rich and already powerful want that trillion dollar prize, as well. “Maniacal overlord” Ogden Morrow (seasoned scenery chewer Ben Mendelsohn) and his dystopian IOI corporation bring their limitless resources to bear against all competitors. A very real threat, both inside and outside of VR. The classic Good vs Evil battle played out within a richly hued CGI-crafted film world.

Borrowing its heart from dreamer/creator Halliday’s childhood, OASIS is brimming with 80s pop culture. Referencing everything from cheesy horror films to VAN HALEN and Atari 2600 ‘Player One‘ is my generation’s nostalgic dreamscape. A trove of “Easter eggs” meant just for the audience to find as we journey along. Special nod to a brilliantly repurposed ‘The Shining’ sequence.

More importantly, Spielberg, working from Ernest Cline’s bestselling novel, has returned to his roots by telling a youthful story that puts its heart above the spectacle. After all, it’s the smaller moments of courage, loyalty, and friendship that make the very best of films matter to us most.

With a strong cast, exceptional world-building production values, loads of epic thrills, abundant (and lovingly placed) pop culture references, and a heartfelt story ‘Ready Player One‘ finds the dreamer in us all. A grand start for 2018.

A joyous exploration of a future world fueled on virtual dreams and an undying hope. Brimming with breathtaking visuals, wondrous “Easter egg” filled adventures, and a beating heart.