Your browser does not support JavaScript!
January 8, 2016

Scouts Guide to the Zombie Apocalypse 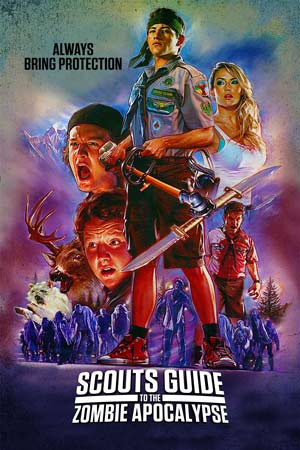 Remember 2015, when every gdamn movie was a zombie film?

I’m getting a little sick of the undead in any flavor. But, if I’ve got to watch one more zombie flick, ‘Scouts Guide to the Zombie Apocalypse‘ is pretty damn entertaining. Blending teenage angst fueled raunch with ‘Zombieland’ attitude.

High school sophomores Ben (Tye Sheridan), Carter (Logan Miller), and their Scouting BFF Augie (Joey Morgan) spend a night out camping with Scout Leader Rogers (a killer, per usual, David Koechner). Of course, it also happens to be the night a zombie outbreak is unleashed upon their hometown.

Returning to a nearly evacuated town with hottie “cocktail waitress” badass Denise (Sarah Dumont) leading the way these Scouts must use all their merit-badge earned skills to find and save Carter’s sister Kendall (Halston Sage) from the oncoming apocalypse.

The cold opener with an overeager lab janitor (a stellar Blake Anderson) is standout. As is Cloris Leachman’s cameo turn as the neighbor lady zombie from hell, “She’s gumming my ass!”

With diseased tongue planted firmly in rotted-out cheek nothing is sacred. Wrapped tightly at 90 minutes, you don’t have enough time to get bored and hardly a moment to reflect on the “been there done that” of it all.

Sure, the senior party finale reeks of every teen comedy horror ever made and many of the quiet moments come off as forced cliche. But, the notion of zombies maintaining fragments of their human personalities (zombie stripper!) adds a clever and fresh spin on the genre.

And the cast is solid with decent onscreen chemistry. Tye Sheridan spins away from his dramatic origins (‘Joe’ and ‘Mud’) trying out youth-run-amok comedy. Playing well off a hyper-manic Miller and straight-man Morgan.

‘Scouts Guide to the Zombie Apocalypse‘ is a grand example of just having “fun at the movies.” Remember that?