Your browser does not support JavaScript!
July 14, 2018

Sicario: Day of the Soldado 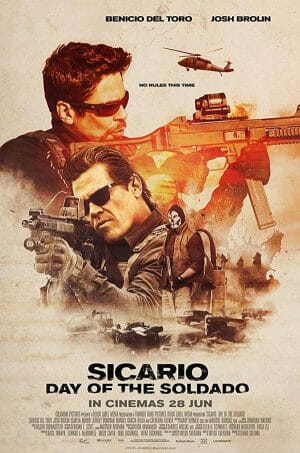 Well-staged action, solid performances, and a total lack of fresh.

2015 thriller ‘Sicario‘ is a near-perfect film that did everything about right. 2018 follow-up ‘Sicario: Day of the Soldado‘ is merely a pale reflection of that greatness. By going bigger this undercooked sequel feels smaller.

Thriller is a tough genre to get right. It’s difficult to balance the action, drama, and suspense in such a way to keep us both entertained and engaged. Unlike horror, the terror comes solely from what’s next, not from what’s now. Even if we like the characters, we must still believe in the potential threat(s) to keep us hooked.

Having international terrorists crossing into the US from Mexico with drug cartel support is a decent enough premise. And using CIA agent Matt Graver (Josh Brolin) and his ruthless “contact” Alejandro (Benicio del Toro) to instigate a cartel war and weaken the insurgence of terrorist support seems, at least on paper, a worthy cinematic undertaking.

Unfortunately, political scheming and a general lack of focus turn this relatively simple plot into an incoherent mess. Support turns from Catherine Keener, Jeffrey Donovan, and Matthew Modine are all but wasted, especially in the murky back half. And a muddled story and ill-defined threats leaves us with little concern over the handful of characters whose names we even bother to remember.

Only a fiery del Toro keeps thing afloat by layering the ruthless “Alejandro” into to something recognizably human. In choosing to protect his nemesis’ kidnapped daughter (Isabela Moner) this sicario not only gives us a cause to champion; but, their desperate struggle against an onslaught of emerging enemies offers notable, allbeit fleeting, thrills.

Director Stefano Sollima and returning scripter Taylor Sheridan play tribute, more than once, to many iconic moments from the first film. However, it’s unlikely that any potential sequel (groundwork is laid in this film’s finale) will find something here to tributize. It’s just not that memorable.

I understand the temptation to force a sequel from a great stand-alone. When you find a cast, settings, and scenarios that click it’s hard to just walk away. Benicio Del Toro’s performance is unhinged magnificence, the action is intense, the story is prophetically topical, and the production mirrors the excellence of its predecessor. However, by not truly expanding the substance of this world nor adding much of anything fresh ‘Sicario: Day of the Soldado‘ becomes more entertaining diversion than impactful brilliance.

Trailer:
Grading Guidelines:
C
– Artistic –* Creative work defined by artistry above all else.