Your browser does not support JavaScript!
January 6, 2016 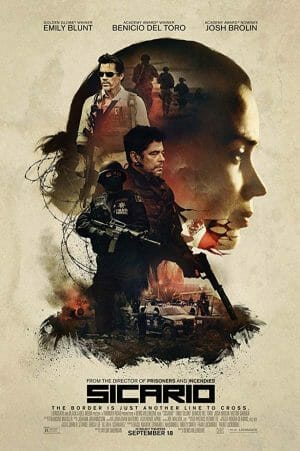 The 2015 thriller ‘Sicario‘ is as intense a film as you’re likely ever to see. From it’s opening moments upon the stark Arizona desert you won’t be able to look away.

FBI agent Kate Macer (Emily Blunt, stunning) has stumbled into a bloody Mexican drug war. She has no idea what she’s volunteered for when Federal Agent Matt Graver (Josh Brolin) and his mysterious right-hand Alejandro (Benicio del Toro, perfection) show up to be her guides down the rabbit hole.

Crisscrossing the U.S./Mexico border the film builds tension through one nail biting moment into the next. Motives can’t be trusted and only one thing is certain; that, no matter what, blood will be spilt and people will die.

Much credit is due to the razor sharp script from Taylor Sheridan and the stark, in your face direction of Denis Villeneuve. Cinematographer Roger Deakins (easily the best currently working) brilliantly frames an epic, dynamic world brimming with chaos and uncertainty. While the tonal dread of Jóhann Jóhannsson’s score unnerves to our very core.

Despite Blunt taking top billing, her ingenue character is merely our escort into the madness. The meat of this story is reflected through del Toro’s steely menace and Brolin’s aloof mystery. These actors bring a weight to their world-weary survivors that transcend any idealistic notions of morality and rules. Only those willing to do what it takes can hope to provide a measure of order against the tide of drugs and violence. “And until somebody finds a way to convince 20% of the population to stop snorting and smoking that shit, order’s the best we can hope for.”

The story takes a few needless detours and hits a couple of p(l)otholes. But, that can be forgiven. As ‘Sicario‘ is one of best thrillers of recent memory. Taut direction, a fierce script, and take no prisoners performances. It’ll leave a scar or two.