Your browser does not support JavaScript!
August 27, 2018 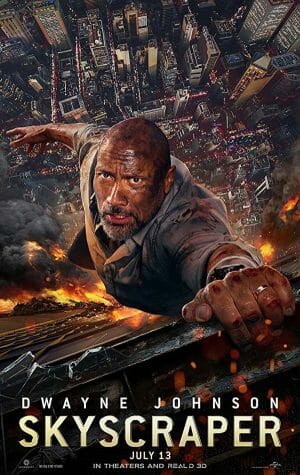 I’m reminded while watching ‘Skyscraper‘ that the best action comes with nuanced characters, an intelligent layered plot, and an emotional core. Unfortunately, this 2018 action flick has almost none of that. Still, it’s got Dwayne Johnson kicking names and taking ass (sorry, shameless ‘Infinity War’ plug).

Basically, ex-solider boy, hostage rescuer Will Sawyer (Johnson) brings his wife (a fearless Neve Campbell) and children to Hong Kong for a business deal with billionaire Zhao (Chin Han). Zhao’s built the tallest building in the world and is looking for an independent expert, inexplicably Sawyer, to give a thumbs up to the agent (Noah Taylor) whose going to insure this 225-floor monument to excess.

Anywoo, bad guys show up at all the perfectly-timed wrong moments and ruin everything. With the building now on fire, his family trapped above the flames, and terrorist thieves lurking about Sawyer’s having a really busy day.

Stealing chunks from ‘Die Hard’ and ‘The Towering Inferno’ while ignoring basically everything that made those films awesome. Despite Campbell and Johnson giving it their absolute best, some crazy stylized action sequences, and tension ratcheted to “11” nothing ever really gels. And the nasties are uniformly cheesy comic book villains–with bad accents to boot. I can’t tell if Noah Taylor’s OTT performance is maniacally awful or award caliber, parody-level brilliant.

If you want a distraction from the monotony of everyday life, ‘Skyscraper‘ might fit the bill. Yet, there’s plenty of other, much better films that would also do that. At least, it’s better than Johnson’s previous train-wreck, ‘Rampage’.