Your browser does not support JavaScript!
April 22, 2019 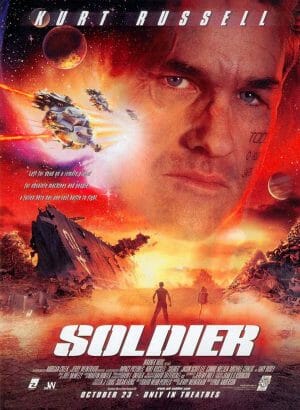 Before director Paul W.S. Anderson got lost down the rabbit hole of “Resident Evil” dreck he saw himself as an emerging high-brow genre director, a la Ridley Scott and James Cameron. Therefore, it’s no surprise when working off a script from David Webb Peoples that this film would borrow elements from Peoples and Scott’s ‘Blade Runner’ and Cameron’s ‘Aliens’. Mixing in ‘Mad Max’ dystopian settings for a finished hodgepodge that convinces only through pure tenacity.

‘Soldier‘ is set in a militaristic, galaxy-spanning future where born and bred veteran soldier Sgt. Todd 3465 (Russell) collides against the tide of evolution. When fresh, new soldiers arrive, “Todd” and his lot are quickly replaced. Left for dead on a desolate “garbage” planet Todd must now discover the humanity lost through decades of faithful obedience and mindless killing.

He is rescued by an idealistic refugee named Mace (Sean Pertwee) and his beautiful wife (Connie Nielsen). Soon Script-Writing 101 sends this built for killing soldier through perfunctory, cliche-riddled “obstacles” during his attempt to blend in with the peaceful families, scavengers, and farmers that now offer their shelter and protection from the harsh, alien environs.

And, of course, Todd’s brutal skill set is quickly put to test once his old military colleagues bring that fresh new crop of soldiers to this very planet for some much-needed battle training. Let the redemption games begin…

Sure the dialog is often groan-worthy adolescent, many side-characters are non-dimensionals, and Paul W.S. Anderson can’t just keep his baser instincts in check–leading to genre trope and melodrama overload. Still, it’s much better than what Anderson’s future filmography would soon bring.

So disregard all naysayers dissing this classic of 90s cinema. ‘Soldier‘ may not be the high-brow science fiction its creators intended, but, it offers glorious, gratuitous schmaltz and action in spades. Along with one of Kurt Russell’s finest and most understated performances.

Embracing all the glory of genre cliche and Hollywood schmaltz allows this mash-up of action and sci-fi to reach near parody levels. While Kurt Russell’s beautifully nuanced, highly physical performance shines bright.