Your browser does not support JavaScript!
November 13, 2016 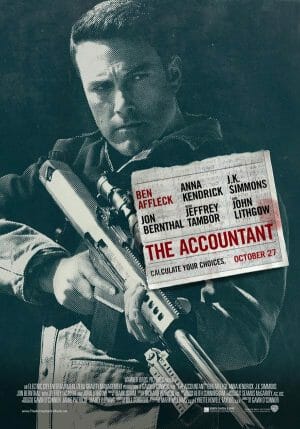 Director Gavin O’Conner (‘Warrior’ and ‘Miracle’) unites with Ben Affleck for the 2016 thriller ‘The Accountant‘. An intelligent script, unflashy direction, and restrained performances turn this would be gimmick about an ASD (autism spectrum disorder) assassin/accountant into excellent entertainment.

Thankfully, scripter Bill Dubuque leaves the heavy-handed melodrama from his prior film ‘The Judge’ behind. Keeping things close to the vest, the layers of the multi-plate spinning plot and its complex anti-hero are painstakingly peeled. And, aside from a one too many guilty pleasure last act reveals, the story and characters ring true.

Ben Affleck imbues the autistic “Christian Wolff” a weighted nuance. And despite his deal-with-the-devil day job as accountant for the world’s worst criminal masterminds, Wolff easily gathers empathy through a socially awkward nobility and a series of defined by tragedy flashbacks.

When a routine corporate audit reveals deep-level conspiracies it unleashes the wrath of a hired merc played with charming ruthlessness by Jon Bernthal. While Christian attempts to uncover the villain behind the villain he struggles to keep corporate whistle-blower Dana (a disarming Anna Kendrick) alive.

O’Conner keeps the action fast and brutally efficient. This is not a film for action fans, but for fans of intelligent, strongly built character-based thrillers. That being said, the last act is a sweet symphony of violence akin to ‘Taken’ and ‘John Wick’.

Notwithstanding the shock value of this “neuro-typical” character’s atypical career, the subject of autism and ASD is respectfully acknowledged. Neither Affleck, nor the filmmakers resort to any cheapening of what this developmental disorder is capable of doing to the persons/families impacted.

So despite a few lazily inserted plot contrivances and a needless subplot/manhunt involving the great J.K. Simmons ‘The Accountant‘ offers plenty of tension, drama, and thrills. Just watching Affleck and Bernthal’s high-tension cat and mouse is worth the price of admission on its own.

Giving the characters their due transcends much of the guilty-pleasure “coincidences” and needless subplotting. And the action, acting, and thrills are all high-level. A good thriller with a great cast.