Your browser does not support JavaScript!
September 14, 2018 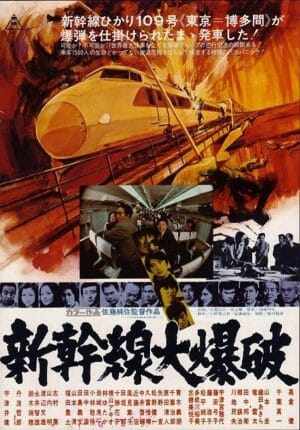 Most people don’t know that the 1994 actioner ‘Speed’ with Keanu Reeves was inspired by a superior 1975 Japanese flick, ‘The Bullet Train‘. A solid disaster film akin to ‘The Towering Inferno’ or ‘Airport’ wrapped into a nasty little crime caper.

When businessman Tetsuo Okita (Ken Takakura) loses his company, his wife, and his pride he doesn’t give up, he fights back. Enlisting help from loyal colleagues he devises and executes a master plan to fix a bomb onto a passenger bullet train and then demand ransom. Those greedy bastards must pay.

Once the train exceeds 80 kilometers per hour that bomb activates and if the train ever slows to below 80 km/h it goes off. The train company, working with police, must either identify and stop Okita, pay the 5 million dollars, or find the bomb and diffuse it. 1500 passengers are counting on a solution and there’s only 12 hours left before the end of the line.

A great premise that also worked well in the American-ized version. Still, this train-on-tracks scenario is infinitely more palatable than some bus weaving through daytime Los Angeles traffic at high speeds.

Essential differences with the now iconic ‘Speed’ don’t stop there. At over two and a half hours, more depth is available for developing the “bad-guys” and their “foolproof” scheme. Building a somewhat sympathetic group of misfits contrasts sharply with Speed’s way-OTT loner maniac.

Notable stand-outs among the overly large ensemble of momentary heroes are train director Kuramochi (Ken Utsui, stellar) back at station control and the train’s lead conductor Aoki (a dramatic turn for action-star Sonny Chiba). In working together exclusively by radio Kuramochi and Aoki help pave the way for other sight-unseen film partnerships to come like ‘Die Hard’ and ‘Unstoppable’.

Unfortunately, even with the longish run time most of the onboard train drama involves a sea of interchangeable faces seen in quickly forgotten moments of panic. For a nice change of pace, however, there’s a few decent action scenes/foot chases as police seek out co-conspirators apart from the train’s confining settings.

With great lead performances, well established heavies, a fresh (at least, for its time) and suspense-filled set-up, effective practical effects, and patient, striking direction ‘The Bullet Train‘ / ‘Shinkansen daibakuha‘ is a helluva ride. A testament to Japanese cinema.

A smarter, better developed story and characters make this 1975 Japanese film superior to its 1994 American counterpart. Tense, stylized direction and grounded performances keep us glued to our seats.