Your browser does not support JavaScript!
June 14, 2016

Imaginations from the Other Side 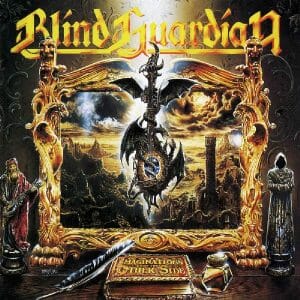 The Power Metal album that unleashed a beast.

Many fans consider BLIND GUARDIAN’s 1990 release ‘Tales of the Twilight Wood’ their turning point. However, it’s 1995’s ‘Imaginations from the Other Side‘ that ushered in the true glory of these German Metal legends. Shedding some of their 80s Speed for something more beautific–melodic Power Prog.

Flemming Rasmussen’s weighty production, the sophisticated, spacious compositions, and the epic performances all ensure ‘Imaginations‘ a place in Heavy Metal folklore. Earlier albums glimpsed what was coming; but, their dependence on nosebleed velocities kept those works from full-force impact.

Immediately, we feel a fire burning under the intro keys of title track, “Imaginations for the Other Side“. No longer content at being just another European Power band, BLIND GUARDIAN was making their “evolve or die” stand.

Before this release GUARDIAN had sourced J.R.R. Tolkien for inspiration. However, ‘Imaginations‘ is 100% (more like 99%) Tolkien free and the thematic expansion adds variety and a much welcomed darkness. Evolving into their now trademark sound–layered vocal harmonics, intricate arrangements, grinding riffage, and world-pummeling rhythm.

Picking up where 80s METALLICA died off “I’m Alive” stirs brimstone into a wonderfully macabre folk slurry. And the killer “Born In a Mourning Hall” dives in with an all be damned refrain. While the labyrinthine “The Script For My Requiem” brings along plenty of requisite headbang.

Vocalist Hansi Kürsch lords over a regal, acousticky “A Past and Future Secret” and the power wail of “Bright Eyes“. While the Arthurian tale “Mordred’s Song” evokes a sorrowful, noble warrior resilience.

It’s a pity that this would be the last time Kürsch performed bass on a BLIND GUARDIAN album. Here with Drummer Thomen Stauch they craft a sublime tower of Teutonic temponic beatdown. Whereas songs like “Another Holy War” submit idyllic shredder resumes for guitarists André Olbrich and Marcus Siepen. Before closing on the Prog saga masterpiece “And The Story Ends“.

The pioneering ‘Imaginations From the Other Side‘ remains the purest Metal accomplishment of BLIND GUARDIAN’s 30+ year career. Later albums would often get bogged with over-production and QUEEN level pomp. Yet, here in 1995 they still sound eager and fresh. Easily one of my top ten 90s Metal albums. –Amazing, I tells you. Amazing!