Your browser does not support JavaScript!
November 25, 2016 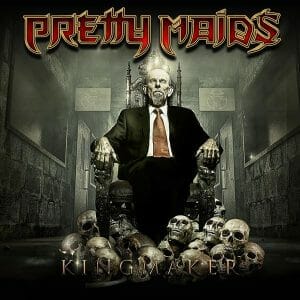 Another fine release from a stalwart of Euro Rock.

The duo of Guitarist Ken Hammer and Vocalist Ronnie Atkins have being making Rock/Metal for 35 years as principle/founding members of Danish band PRETTY MAIDS. Their 14th(!) album ‘Kingmaker‘ hits 2016 as a solid Melodic Hard Rock effort.

MAIDS’ albums can be ranked by how many great tracks sit alongside the generic Hard Rock trappings that define their well-established sound. They’ve never quite emerged from behind their 1980s DEEP PURPLE/WHITESNAKE retro-styled roots. Take or leave it.

Pretty Maids enjoy doing what they do best.

Yet, one can’t dismiss hook-bathed cuts like Arena Rock anthem “Face The World“. Cheesiness be damned, these are some of the most addictive ear-worms you’ll likely hear in 2016. Atkins’ gravely soar has aged as fine wine.

Other standouts include a grinding “Humanize Me“, the metallic “King of the Right Here and Now“, the edgy commentary of “Civilized Monsters“, and the rhythmic Prog-ish assault “Was That What You Wanted“.

Many A-for-effort songs like ambitious opener “When God Took a Day Off“, “Bull’s Eye“, and the title track never grab. They simply lack the necessary melodic bait.

While many bands promote an evolution of style for continued success, just as many fail because of it. When you find what works, there’s a compelling argument that staying the course is a must–even risking the staleness that often follows. So, despite an over dependence on radio-friendly 80s Rock there’s still lots to like about this band and their latest work.

Sticking to what these veteran musicians know and doing what they do best gives this Hard Rock album a leg above its more paint-by-numbers trappings.