Your browser does not support JavaScript!
March 13, 2017 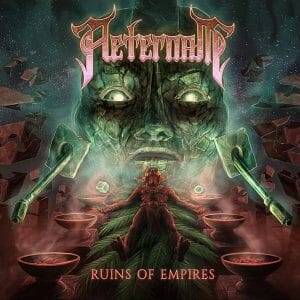 It’s hard for any band to overtake the tower that ORPHANED LAND built. However, Canada’s AETERNAM is giving it a glorious shot. If you prefer your Symphonic Folk a little rougher, a little tougher their 2017 release ‘Ruins of Empires‘ should do nicely. Intricate, melodic, and heavy as f*ck.

Having never heard AETERNAM before, I was pleasantly surprised at the rich Oriental Folk infused melodies, the elaborate compositions, and the intense, modern production. And they’re from Quebec, Canada! The Canadian Metal scene is oft overshadowed by the US and Europe. Yet, the land of ANNIHILATOR, THE TEA PARTY, and RUSH can not be ignored.

Recorded as a three piece: Drummer/Vocalist Antoine Guertin, Vocalist/Guitarist Achraf Loudiy, and Bassist Maxime Boucher. With a host of guests filling out the lush choruses. A self-produced/independent release with Jef Fortin handling the Engineering, Mixing and Mastering.

An amalgam of alternating harsh/clean vocals over strong basslines, symphonic/folk instrumentation, abundant chorals, and guitar heft. Using a tried-and-true formula with results that are anything but conservative. Think Disney’s ‘Aladin’ crossed with Rob Zombie’s ‘The Devil’s Rejects’. WTF?

With nine tracks at barely over 40 minutes nothing overstays its welcome. The choral/folk introduction on “Damascus Gate” offers grand entrance into this Middle-Eastern Death fantasy.

Highlights include Melodic monster “Fallen Is the Simulacrum of Bei” and its wild acoustic break, Prog thumper “Sun Shield“, which leads into the whimsical Oriental reprieve of “The Keeper of Shangri-La“, and the Modern metaller “Colossus“. Closing out on the cavernous 7-minute long “Zadyin Arga“.

AETERNAM’s ‘Ruins of Empires‘ takes us on a thunderous adventure into far-away lands and times long passed. It’s not a reinvention of the Metal wheel, more like a well-crafted refinement.

A turbulent, engaging mix of Middle-Eastern Folk, Symphonic, and Death Metal that rages, roars, and soars.