Your browser does not support JavaScript!
June 11, 2022 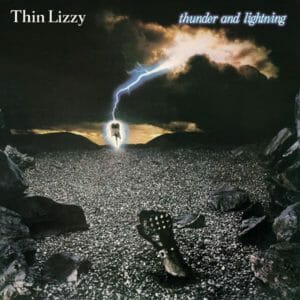 You stand there feeling the love the audience has for you, and you think, ‘Is this really going to end?’ –Phil Lynott

THIN LIZZY’s album ‘Thunder and Lightning‘ is a triumphant, yet ultimately tragic swan-song for a band that never achieved the global recognition so rightly deserved. Yet, its (and their) legacy persists well past this 1983 release.

I would argue (and win) that beyond “The Boys Are Back in Town“, “Jailbreak“, and, perhaps, “Whiskey in the Jar” the vast majority of people couldn’t name another THIN LIZZY song. Nonetheless, over the course of more than a decade and 12 studio albums this Phil Lynott led band laid a foundation of killer guitar centric Rock that has inspired countless artists and fans.

Adding acclaimed Metal producer Chris Tsangarides (coming off of Sykes’ previous band TYGER OF PAN TANG’s first two albums) was the final piece needed to give ‘Thunder and Lightning‘ a timeless persistence. Starting out as an Irish pub band, Lizzy had graduated into a fully-fledged NWOIHM

The tracks dive between soaring Hard Rock, crunchy Metal anthems, and potent Blues-infused 80s balladry. Stand outs include “The Sun Goes Down“, “Bad Habits“, and “The Holy War“. All driven by some of the tightest rhythms and searing guitar histrionics outside of PRIEST or MAIDEN. But the co-penned by Sykes cut “Cold Sweat” punches hardest. A Metal classic that’s seen its own fair share of cover tune honors.

It simply wasn’t meant to last. Even with renewed energy from fans and the press after ‘Lighting‘ Lynott chose to pursue a solo career; while the other members sought work elsewhere. And with reunion talks brewing Phil Lynott died of compounded drug related issues in 1986. He was only 36.

THIN LIZZY’s ‘Thunder and Lightning‘ has somehow gotten lost in the shuffle among their other classic albums. But it remains a shining, often stellar, example of 80s Rock/Metal. An easy Recommend.

Sometimes all it takes is the balls to know when to call it quits. A glorious gut-punch finale and unfortunate tribute this album was to be.