Your browser does not support JavaScript!
August 21, 2016 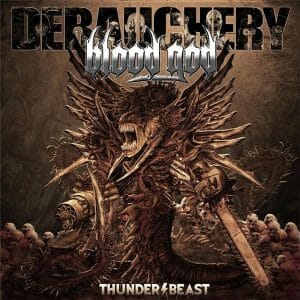 Germanic maniac Thomas Gurrath has doubled down for his 2016 split CD ‘Thunderbeast‘. The first disc is credited as DEBAUCHERY and has Gurrath in full guttural “Monster Voice” for the 14 hybrid Metal/Hard Rock tracks while the second disc, credited as BLOOD GOD, gives us the same music (in an alternate song order) with his Punkish “Demon Screeching”. Despite the gimmicky nature of this concept and its rather insipid lyrics and themes, ‘Thunderbeast‘ is an ambitious collection of Death ‘n’ Roll.

You can’t deny Gurrath’s (calling himself “Mr. Debauchery”) skills as a musician. The entire album is boiling over with melodic (meat) hooks, talons, claws, and teeth. The remaining (and unidentified) band members offer plentiful bloodied axes and rhythmic blasts. However, the mind-numbingly simple RAMONES-inspired pound nearly lulls one into an apoplectic stooper.

The mix-up of Death retch and Punk snarl gives a nice counterpoint to these otherwise identical compositions. Yet, blending the varieties into a single “best of” disc might have been a better choice. It’s the same freakin’ guy singing the same freakin’ songs! Alas…

DEBAUCHERY won’t ever apologize for its way OTT themes and presentation. Just visit their website and read any of the provided mythology for a appreciation of the epic scope of this deep dive. Good thing Gurrath is applying his creativity and talents to music and not, let’s say, something less “socially tolerable”.

Apparently, there’s a third vocal variation being called BALGEROTH to arrive soon. Can’t wait to see what that’s about?! Until then we must be content with only two versions of ‘Thunderbeast‘. Whatever you call it, DEBAUCHERY or BLOOD GOD, it’s damn(ed) addictive Hard Rock played with a demonic Metal edge.