Your browser does not support JavaScript!
February 16, 2019 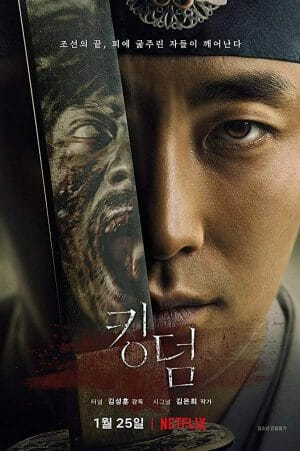 Reaffirming that politicians and zombies make a perfect, idyllic pairing.

South Korea has been taking Hollywood to task these last couple of decades. Borrowing themes and ideas from American TV and films and then adapting them for Korean audiences in often notable, sometimes superior ways. It’s only fair as Hollywood’s being doing the same to the rest of the world since the dawn of cinema.

Now with the backing of Netflix and an abundance of talent both behind and in front of the cameras we get a Korean series that’s taking a run at ‘Game of Thrones’ by way of ‘The Walking Dead’. Season One of ‘Kingdom‘ is a highly unique and refreshing spin on both Eastern feudal political drama and zombie apocalypse fare.

The murky politics of Joseon dynasty-era Korea provide ideal stage for this story. The series follows the intrigue behind one clan seeking to overthrow their current king through any means possible. It leads the King’s bastard son (and heir to the throne) “Crown Prince” (Ju Ji-hoon) literally running for his life. While a mysterious disease ravages his father the Prince is left vulnerable to the wily ways of a pregnant step-mother (Kim Hye-jun) looking to put her legitimate unborn son(?) on the throne, instead.

On the run, heading south the Prince and his loyal servant (Kim Sang-ho) seek a doctor who might have answers and, perhaps, a cure for the King. Along the way he discovers this disease is rapidly turning the population into a hoard of undead cannibals across the entire region. So they unite with herbalist/physician Seo-bi (Bae Doo-na, ‘Sense8’) and a rag-tag warrior (Kim Sung-gyu) to try and stop the spread and help the poor who are being eaten alive. All the while trying to avoid the Imperial guards coming from the north to arrest (kill?!) the Prince.

The betrayals and political deceit portrayed are “Cersei Lannister” any means justify the ends horrific. And, although our “hero” the spoiled Crown Prince is far from perfect, it’s easy to overlook any shortcomings amidst such a pool of villainy and self-serving cowardice.

In fact, the political plotting is–on its own–quite compelling. But, that’s not why we’re here. Have no fear, these “zombies” are nasty, scary things worthy of respect and fear. Think ‘World War Z’ sprinters rather than George Romeo lumberers. Their presence is felt throughout, yet, rarely seen as they must “hibernate” during the day. This keeps anxiety levels high and prevents the desensitization that usually comes with never-ending onslaught, a la ‘The Walking Dead’.

Apparently, the epic period scale production blew past their sizable budget–which is evident with the motion picture quality displayed. And all of the performances from the extensive cast are spot on.

The only real issue I have is with the truncated 6-episode season which feels more like a prologue than a complete story. And that cliffhanger ending will leave you crying in anguish. Thankfully, Season Two starts production soon. So we won’t have long to wait.

Simply forsake any reluctance towards “foreign” and just dive in. Season One of Netflix’s ‘Kingdom‘ is Hollywood level horror wrapped into devilishly twisted political period drama. But, don’t let me catch you watching any “dubbed” version–that just won’t do.

Following in the footsteps of American genre TV, this South Korean period horror series offers plenty of nasty zombies and plenty of nasty humans for our heroes to battle. All wrapped in painstakingly textured settings and picturesque locations.